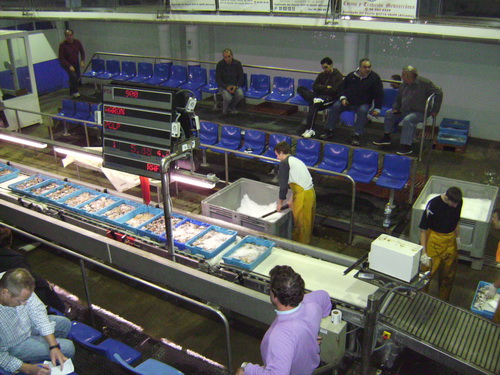 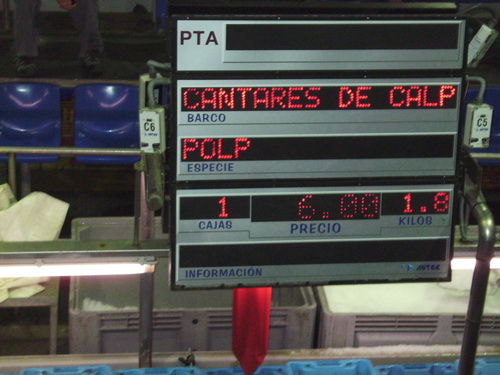 Before the advent of the new technology in the Calpe Fish Market, the sale of fish from the boats was held daily in the fish hall. It consisted of boxes of fish being auctioned by the person in charge calling out the price. It started at a high price and then descended very rapidly until someone put their hand up to buy and the priced was settled.

This procedure is now highly technical and most interesting to watch. Firstly the hall has tiered benches either side where prospective purchases sit to await the arrival of the fish. In the middle of the hall is a conveyor belt which holds the boxes of fish and above the belt is a cable running from one end to the other. Attached to the belt is a large red arrow and as the boxes of fish move along each one stops below the red arrow. At the same time there is a large electronic plaque which shows firstly the price in pesetas, then the name of the fishing boat, the type of fish in the box being auctioned, the number of boxes, the price in euros and the weight. On the last line is the name of the purchaser. All this is in the Valencio language.

Again the price starts high and gradually reduces and in order to bid you have to have a gadget which looks like a mobile telephone and when you want to bid you press the top of the gadget. The box of fish then moves along and there is a young man who throws a large amount of ice on top of the fish. The box moves further along and a ticket is issued automatically from a machine and drops into the basket.

At the end of the hall in a glass fronted office a man sits at a computer to record the whole transaction.

All this is carried out very rapidly and makes for an interesting hour or two. The auction starts around 5.0 p.m. You can enter the hall through glass doors to the left of the building, mount the stairs and view from the gallery.